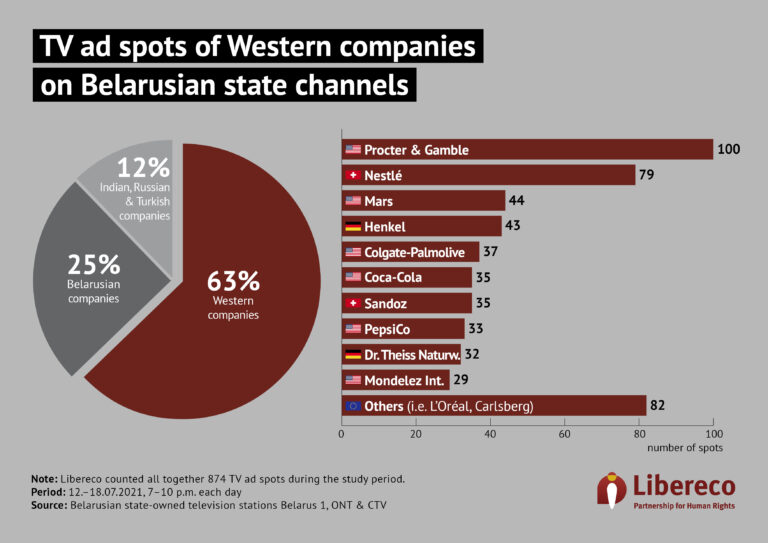 63% of ads on Belarusian state TV channels are made by European and American corporations.

Two out of three commercials aired on Belarusian state television are placed by large companies from Europe and the United States. This is evident from an analysis conducted by the German-Swiss human rights organization Libereco.

Almost two thirds (63%) out of a total of 874 commercials shown in prime time on Belarusian state TV channels on the week of 12 July belonged to Western companies. Commercials are aired immediately before, after, and during political and news programs with clear propaganda features.

Libereco called on all companies from the EU, USA, Switzerland and the United Kingdom to stop placing commercials on Belarusian state TV channels immediately and thus no longer financially support the Lukashenko regime.

“For a year now, the Lukashenko regime has been terrorizing its own population; even the worst PR manager should have noticed that. The fact that global brands like Procter & Gamble, Mars, Henkel, Coca-Cola or PepsiCo continue to advertise on the dictator’s propaganda channels is a scandal. The companies obviously only care about their profits, they do not care about the catastrophic human rights situation in Belarus,” says Libereco’s Chairman in Germany Marco Fieber. He accused Western corporations of “moral bankruptcy”.