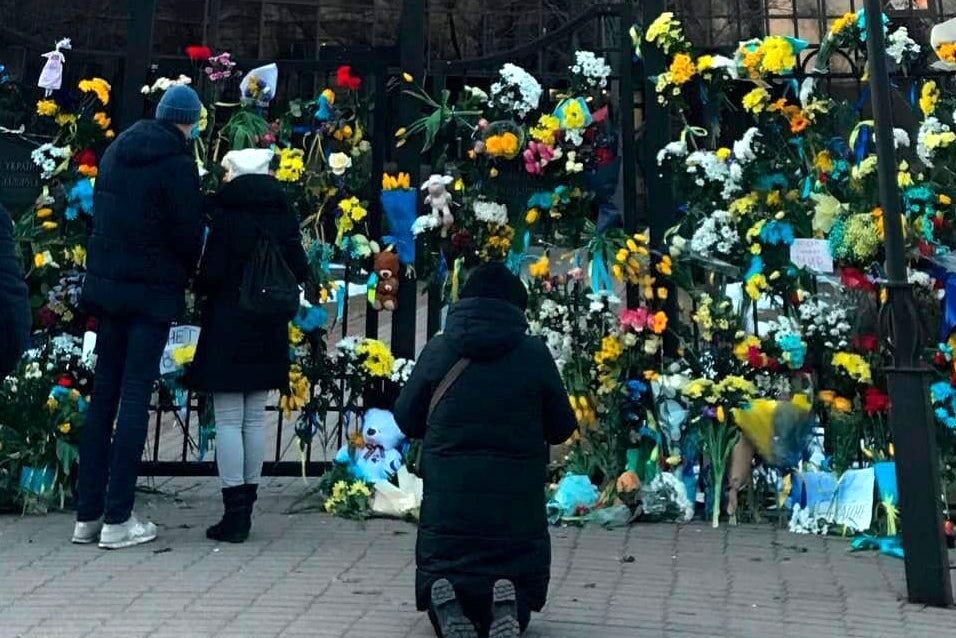 Belarusian writer Andrei Zhvaleuski, who continues to live in Belarus, wrote an article about the nation’s situation during Russia’s military aggression against Ukraine from the territory of their country. In his text, he addresses Ukrainians, citizens of democratic countries and Belarusians themselves. We are publishing excerpts from the article.

Now that the whole world is watching the military aggression of Russia against Ukraine from the territory of Belarus, the Belarusians are faced with the words “accomplices of aggression”. These are addressed not only to Lukashenko and his subordinates, but imply that all the Belarusians are to blame for not fighting on the side of Ukraine.

Ukraine needs concrete help. I can only say to them: “We are trying. Not only are we going out to protest, which we haven’t done for more than a year. Not only are we going to jail – 800 people were detained, which would correspond to 3,500 in Ukraine. Our partisans are not inactive. It’s a drop in the bucket so far, but… And now I’m tempted to make excuses again. I will not. Ukraine is not in the mood for excuses. I just ask you to believe – we do what we can. Yes, we can do little, but it is not our fault, it is our woe.

And why it is our woe must be explained to another group of readers, those who have grown up in real democracies. Or those who are so used to it that they genuinely don’t understand, “Why don’t you depose your Lukashenko?”

An immigrant acquaintance in the US once told me how American students studied Stalinist repression. “What is this nonsense?” They were indignant. “Why did they allow it? Why were they sent to concentration camps? If they sent me to a concentration camp, there’s no way I would have gone!” (Mind you, this is not a joke, but a real-life quote.) Now, your indignation sounds about the same to a Belarusian. You keep thinking that we are exaggerating when we talk about concentration camps.

Keep in mind, dear citizens of democracies, that I live in a country of 9.5 million, where there are more than 1,000 political prisoners. In Germany, with the same scale of repressions, there would be almost 9,000. In the United States – 34,000. Try to keep it in mind that Belarus is a country with no law at all. In his New Year’s report, Belarus’ Prosecutor General boasted that 1,600 people were convicted in “political” cases in 2021, and not a single trial ended in acquittal.

(Why do I say “more than 1,000” political prisoners, and the prosecutor says 1,600? Our human rights activists, some of whom are behind bars, are very scrupulous when they declare a person a political prisoner. Too scrupulous, if you ask me.) In short, dear people spoiled by democracy, every time you say “Why didn’t Belarusians…”, we hear “I wouldn’t have gone to a concentration camp”.

And now let’s move on to the group of readers who react to the “collective guilt of the Belarusians” in the most raucous way possible. Yes, I mean us Belarusians. Enemies have already realized that “collective guilt” can be used to drive a wedge between Ukrainians and Belarusians. Fake accounts are more and more present in discussion by real people, and persist in saying the same: Belarusians betrayed Ukraine, Belarusians are aggressors, Belarusians are bastards. It’s easy to recognize those fakes: they usually have an empty account, and only more bots among their friends. While you have to talk to the real Ukrainians and promise to do something, with trolls, the conversation should be short – submit a complaint and ban them.

Most importantly – what are we to blame for? This is a really important question. We do feel guilty. But when we are accused of not confronting riot police with our bare hands, we are sort of confused. It causes surprise, not resentment. So that’s not what we’re guilty of.

What are we guilty of?

I confess, I’ve been pondering for a long time. I recollected different periods of Belarusian history and checked: what the things were that I was trying to skip, where I did not want to stop. For me, this extremely unpleasant point was the middle of the 1990s. That is, when Lukashenko first won the elections and then destroyed all democratic institutions, subjugated all branches of power and started building a police state.

I, like the overwhelming majority of Belarusians, was just whining. I was telling jokes. At first, I still tried to vote against all kinds of referendums, then I gave up going altogether. I made fun of the opposition. In general, I watched indifferently as they built a fence and put towers with machine-guns around me.

That is my actual fault. I think my peers and older people also secretly understand this, but are afraid to admit it. Or unafraid. It doesn’t matter. What’s important is that you can’t change the past. But it is possible to draw lessons from it for the future. Right now the task is different: to defeat the dictatorship. Vanquish a huge repressive apparatus, which now includes not only police, the KGB and other punitive agencies, but also those who should theoretically protect us from the rule of arbitrariness: the prosecutor’s office, the courts, even lawyers. Add to this the now complete absence of any non-governmental organizations.

But this does not mean that the task is impossible. Everything can be solved if we act to solve it. But if you are crying and arguing with your own people, then all your energy is wasted on this. Try to do something. Right now.