Svetlana Alexievich received one of highest awards in Germany 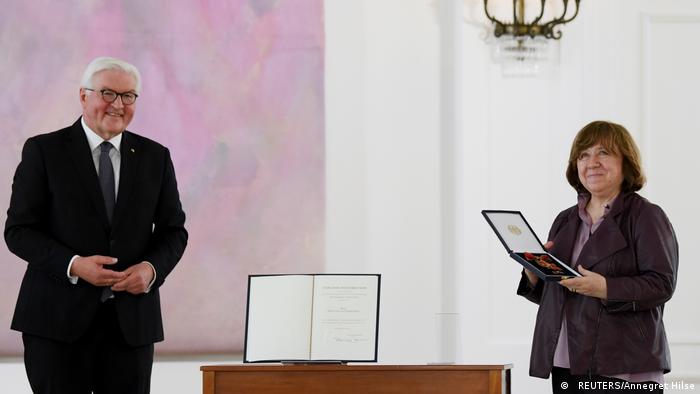 German President Frank-Walter Steinmeier and Svetlana Alexievich during the awards ceremony in Berlin.

In his speech, Steinmeier touched upon the many months of protests in Belarus. “A woman’s face is the face of a peaceful, courageous and still brutally suppressed desire for the future,” the head of state emphasized.

According to Alexievich, the opposition was driven from the streets, and many of them from the country, but the protesters will never accept the return to slavery. “They will never be who they have been until the summer of 2020,” she noted.

Among the most famous works of the writer are the books “The Unwomanly Face of War”, “Zinc Boys” and “Voices from Chernobyl”. Now Alexievich is working on a new book dedicated to the “revolution with a woman’s face” about the mass protests against the Lukashenko regime, which began in August 2020.

After the start of mass protests against the rigged presidential elections in 2020, Alexievich became a member of the presidium of the Coordination Council, which was created on the initiative of opposition leader Sviatlana Tsikhanouskaya. All seven members of the presidium were either arrested (Maria Kalesnikava, Maksim Znak), or forced to leave the country.