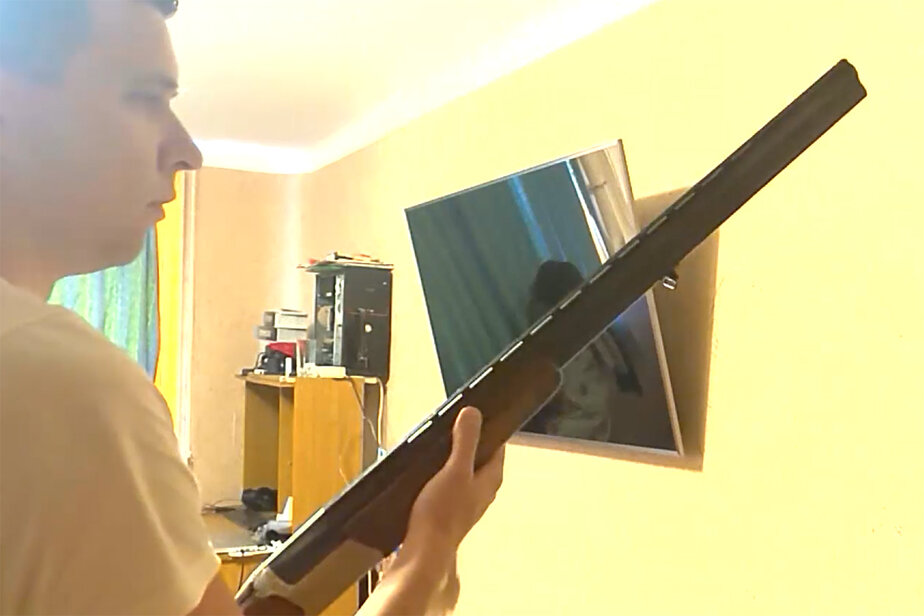 Andrei Zeltsar. Screenshot from the video.

On 28 September, security forces held a special operation in Minsk as they searched the locations “where persons involved in terrorist activities could be”. According to the KGB, one of the suspects shot and killed a KGB officer during the arrest and was killed by the security forces in return fire.

The murdered Minsk resident, Andrei Zeltsar, was an employee of a large IT company. As a member of the Belarusian Society of Hunters and Fishermen, Zeltsar had a registered weapon in his possession.

His wife Maryia Uspenskaya was inside the apartment as well. She was detained on suspicion of complicity in the murder as she was filming the incident with her phone.

A state TV channel showed the edited footage filmed from different angles, at the entrance and from the inside of the apartment. The video raised a number of questions. It is unclear who filmed the alleged shooter in the apartment. The recording is edited so that the moment of the KGB officer’s shooting is missing. One can only see a man with a shotgun shooting in the direction of the corridor. In another edited excerpt of the video, a masked security forces officer shoots in the direction where the shooter was supposed to be. Then the footage shows security forces officers pulling out their colleague, calling him “Dimka” and “Nirvana”. There are traces of blood around him. The woman’s behaviour in the video also raises questions.

KGB referred to the murdered tenant of the apartment as “a particularly dangerous criminal”, although the security forces did not wear any body armor or special equipment during his arrest.

Before the shootout, Zeltsar called the police twice, requesting help from the internal affairs department and informing them that unknown individuals were breaking into his apartment. His phone call resulted in the deployment of a security department detention group. Yet the tragedy had occurred before its arrival.

The Prosecutor General’s Office has already managed to conduct an inspection of the KGB officers’ use of weapon, recognizing their actions as legal.

The deputy head of the Ministry of Internal Affairs and commander of the internal troops of Belarus Mikalai Karpiankou stated that the murder of a KGB officer drew a dividing line between “before and after”. He described the procedure that the security services would follow from now on. “If there is a terrorist and there is an address where he is located we will arrive and warn him. If he doesn’t open the door, the door would explode. The door would be blown up, stun grenades would be used, a dog would be let inside and then we would enter with a shield. If in this situation we do not see the raised hands, the enemy would be destroyed.”

The relatives and acquaintances of the murdered Zeltsar speak of him only positively. It has already caused problems for them as well as for the media that published this information. Thus, the website of the newspaper “Komsomolskaya Pravda in Belarus” was blocked as it published an article in which Andrei Zeltsar’s acquaintances spoke about him in a positive way.

Former contender for the presidency of Belarus in the 2020 elections Valery Tsepkalo made a comment on the murder of Zeltsar, resulting in the opening of a criminal case against him for calls to actions that harm national security.