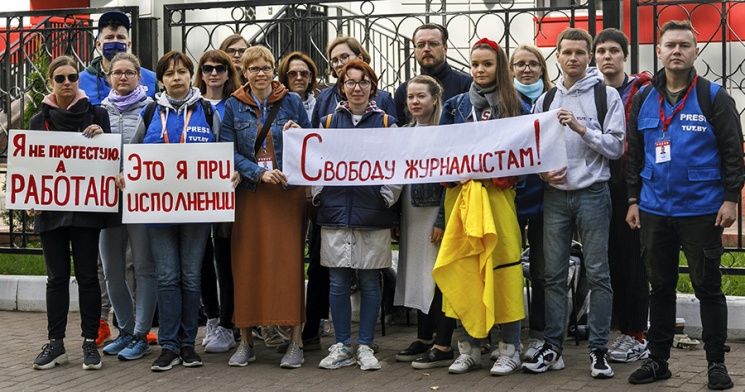 TUT.BY journalists holding posters that read “I do not protest, but I work”, “This is me on duty”, “Freedom to journalists!”, in front of a police building in Minsk on 2 September 2020.

This year, the Free Media Awards for Eastern European journalists – press prizes established in 2000 by the German foundation Zeit-Stiftung and Norwegian foundation Fritt Ord (Free Word) – were given exclusively to Belarusian journalists and media outlets. Usually journalists from different countries receive the awards, but this year an exception has been made.

“We are giving all press awards to Belarusian journalists and media outlets in recognition of their unprecedented efforts and courage during this dramatic year, their work under dictatorship,” said the foundation’s representatives.

The winners include the portal TUT.BY and Belarusian Association of Journalists, as well as the Belsat journalists Katsiaryna Andreyeva and Darya Chultsova, who were sentenced to two years in prison each; the Nasha Niva journalist Natallia Lubneuskaya, who was injured by security forces during the protests, and the TUT.BY journalist Katsiaryna Barysevich, who was imprisoned for six months for debunking the claim of the Belarusian authorities that Raman Bandarenka, who was killed by the security forces, had been drunk at the time of his arrest.

The commentary to the award describes the situation with independent journalism as “alarming” and “dramatic”, with Belarus remaining the most dangerous country for journalists in Europe.

Last year 480 journalists were arrested in Belarus and served a total of 1,200 days in prison. Systematic attacks on independent media have continued this year, leaving 29 journalists and media workers behind bars.