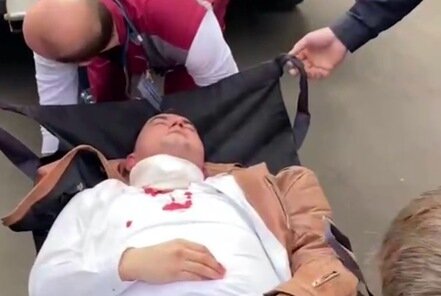 The trial of Stsiapan Latypau has resumed. He is handcuffed with both hands to the guards who accompany him in a glass cage, his neck blue with a large scar visible.

The judge and prosecutor decided to send Stsiapan for a forensic psychiatric examination, although such an examination had already been carried out. Latypau himself noted that all his actions had been caused by the security officials’ treatment and not by his “inadequacy”. At the first hearing of his case, Stsiapan Latypau spoke of the severe pressure and unbearable conditions in the pre-trial detention center, after which he attempted suicide by jamming a pen into his throat.

Many people, including the EU representatives, had come to Stsiapan Latypau’s trial again to support him. But only about 15 people were allowed inside. Journalists were prohibited from filming.