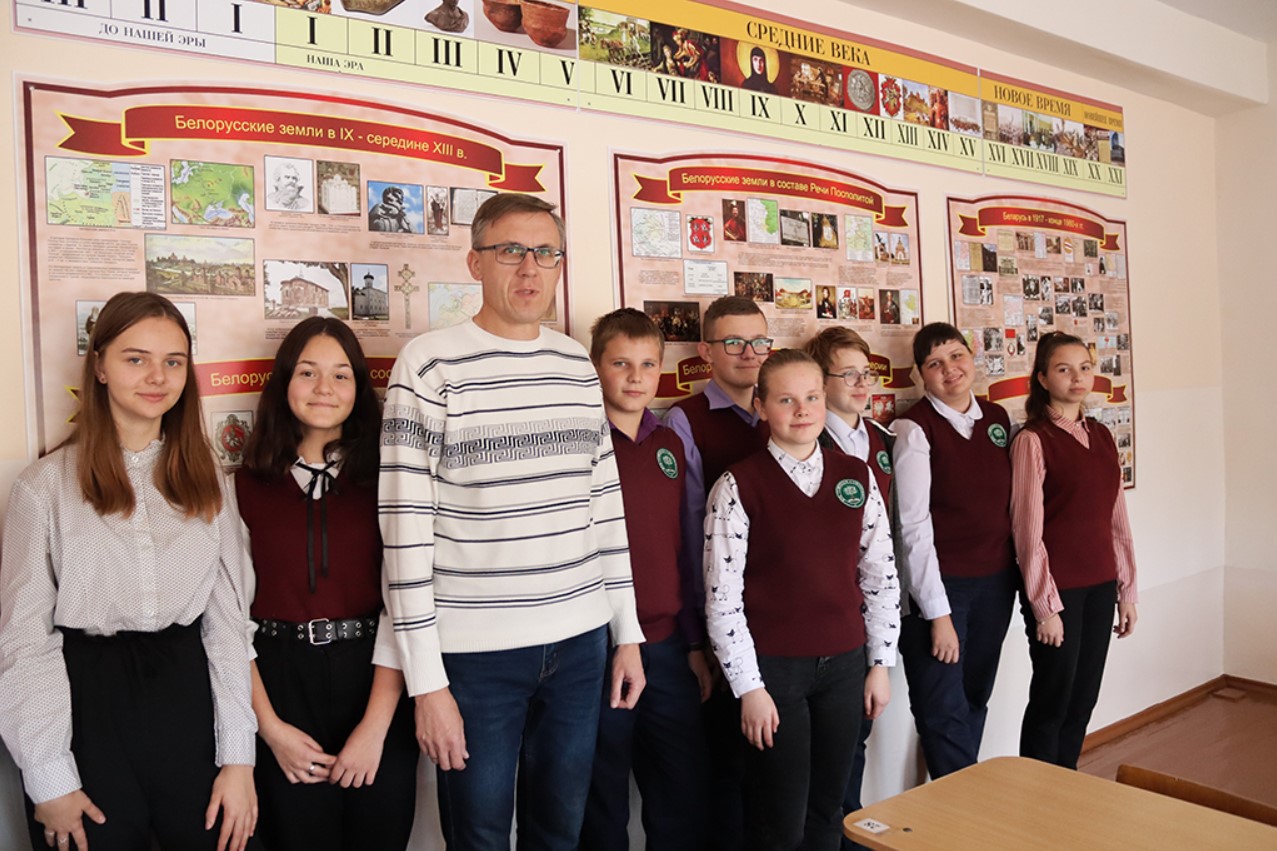 Andrei Piatrouski with his students.

History and social studies teacher Andrei Piatrouski was sentenced to a year and a half in a penal colony for showing 11-graders a video about the Constitution containing the words “bloody dictator”. A local official’s son, who was among the students, recorded the lesson and later posted the video in a “family chat”. Soon after that, the teacher was fired, and later a criminal case was opened against him. Piatrouski was found guilty of slandering Lukashenko.

In the court of the Tsentralny District of Minsk, sentences were passed in a criminal case on the restoration of the “DJs of Changes” mural in the famous Square of Changes. The restoration of the mural on the transformer booth was classified as malicious hooliganism committed by a group of people (Part 2 of Article 339 of the Criminal Code). As a result, 37-year-old political prisoner Vasil Lohvinau was sentenced to two years of open prison and released in the courtroom after spending three months in custody. 29-year-old Dziyana Karankevich, who had been under house arrest all this time, was sentenced to two years of probation.

The former financial department head in the administration of the Leninski district of Minsk Yury Siankou was sentenced to three years in prison for participating in the marches on 16 and 23 August 2020, and for sharing a post which allegedly insulted Lukashenko in social media. Siankou had been detained on 30 April and tried five times on administrative charges, after which he spent 50 days in prison. Then, he was transferred to a pre-trial detention center, being charged in a criminal case.

Political prisoner and journalist Andrzej Poczobut was sentenced to yet another 3 months in custody. He was detained in March as a part of the so-called “Polish case” and is being held in the Zhodzina pre-trial detention center.

Hleb Koipish, director of the Ikvadart web design studio, was detained in Hrodna. Security officials raided the studio office, and the search lasted for several hours. Approximately three hours later, they left with the confiscated equipment and documents, while Hleb Koipish was taken out in handcuffs. The Ikvadart studio has been operating since 2004, organizing numerous charitable projects.

In Minsk, a 23-year-old teacher Aliaksei Minau, who was supposed to have his first working day at the BSU lyceum, was detained. He was detained in a criminal investigation under the article on organizing actions that grossly violate public order. He is in the Akrestsina pre-trial detention center now.

The home of Anatol Shumchanka, the head of the public association Perspektiva, was searched yesterday evening. The visit of the Investigative Committee officers was in connection with a criminal case. Meanwhile, the Ministry of Justice filed a lawsuit against Perspektiva.

A resident of Smarhon Aliaksandr Nahela was sentenced to three years in a penal colony for 13 comments about security forces officials in social media. Aliaksandr suffers from a chronic heart disease. During the interrogation, he complained about feeling ill after having been detained by the police officers. An ambulance was called, and Aliaksandr spent nine days in a hospital, chained to a hospital bed and under police supervision.

A Minsk resident Iryna Stashkevich was sentenced to two years of probation for a comment saying “nit” under a photo of Andrei Parshyn, the head of the Main Directorate for Combating Organized Crime and Corruption. The photo was posted in the Telegram chat called Punishers of Belarus.

A movie critic Taras Tarnalitski was subpoenaed as a witness by the Main Directorate for Combating Organized Crime and Corruption. He was released under a non-disclosure agreement.

Four more people were recognized as political prisoners. As of now, there are 649 prisoners of conscience in the country.