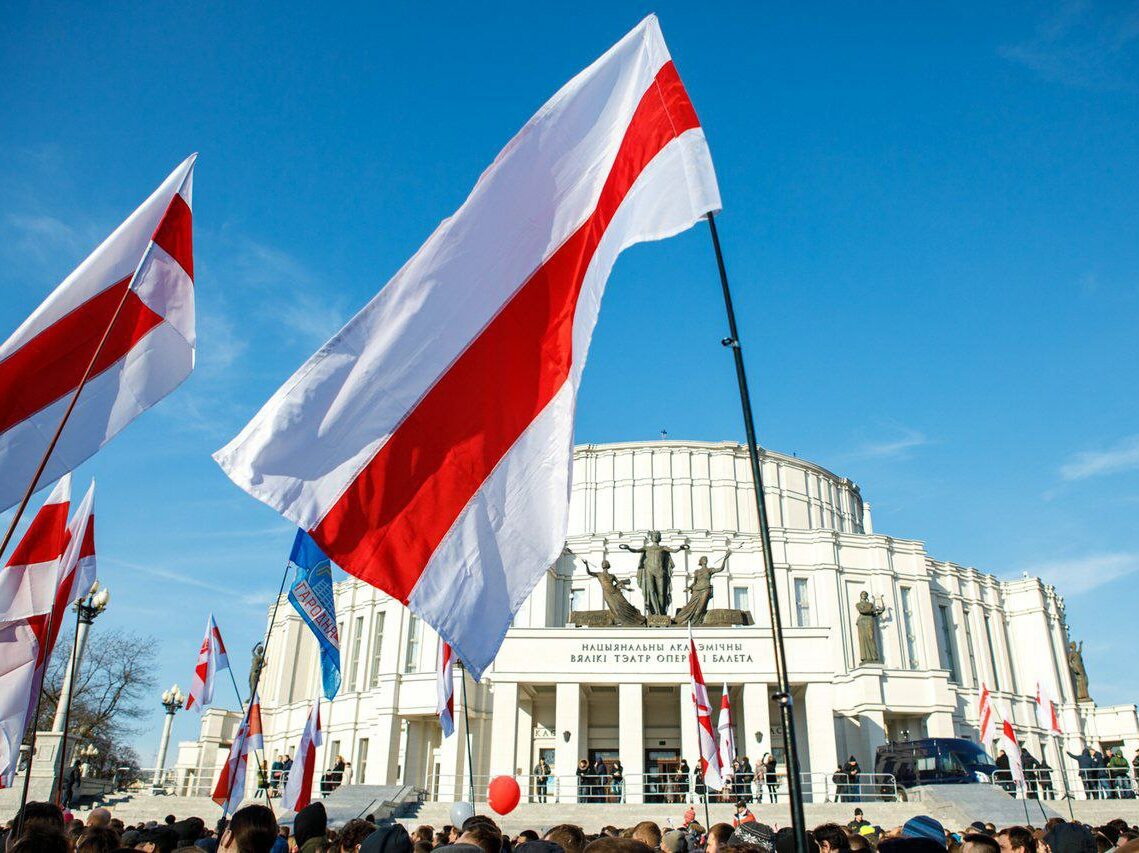 Are Russians, Belarusians and Ukrainians ‘one people’?

Belarusian journalist, historian and writer Siarhei Ablameika has published an open letter to Boris Akunin, the well-known historical fiction author, in response to his statement that Russians, Belarusians and Ukrainians are supposedly “one people”. The Russian-speaking writer, originally from Georgia, has expressed this idea in an interview with the popular YouTube blogger Yury Dud. A great many of people not only in Russia, but also in the Western world share the opinion offered by Akunin that “we [Russians, Belarusians, Ukrainians] have always been all the same… and we are very much alike.” That is why we consider it necessary to summarize here the main thoughts taken from the Ablameika’s letter.

The myth of the “triune” Russian nation was invented by the Russian historical science, which serves their authorities at the ideological front, while ignoring theoretical foundations and methodology, which the science of history should be guided by. The assumption that there used to be a single “Russian” language, which later split up into three East Slavic languages, was refuted by George Shevelov, professor of Slavic philology, back in the 1950s, when he proved that East Slavs had never comprised a single ethnos and that their languages had always been distinct. For example, phonological features of the Belarusian and Ukrainian languages were formed as early as the 8th century, long before the emergence of the language preceding today’s Russian.

There is an enormous confusion around the words Rus and Russian, which is widely used by the creators of the myths which the Russian historical identity is based on. In the 14th–16th centuries, Belarusians called their language “ruski” – today’s scholars refer to this language as Old Belarusian. In 1517, the Belarusian Bible was printed in this language, and throughout the 16th century, three Statutes of the Grand Duchy of Lithuania (GDL), Europe’s first set of constitutional laws, were published. The Belarusian and Ukrainian identities were formed within the borders of the GDL in the 14th–16th centuries.

“Russian”, which was the official language in the GDL, had nothing to do with the language spoken in the Tsardom of Muscovy, just as Russian ancestors had nothing to do with the Battle of Grunwald in 1410:  the “Ruthenian” regiments that took part in the battle were none other than Belarusian and Ukrainian units with their own culture, banners, and chivalry traditions.

After the first partition of Rzeczpospolita in 1772, when the eastern part of Belarus was conquered by the Russian Empire, the Belarusian Uniate Church, which 80% of the population belonged to and which held religious services in Belarusian, was practically destroyed. This caused mass shootings of peasants who refused to convert to the Eastern Orthodox Church, beatings to death with rods, and so on. The repressions continued unabated over the next 100 years.

The beginning of the 19th century gave rise to Belarusian and Ukrainian national liberation movements. Nevertheless, Russia’s historical tradition fails to see the awakening of national identity among the inhabitants of the former GDL, which had been underway throughout the 19th century. Instead, it sees a “Polish scheme”. Then, there was the uprising of 1863–1864, which is called Polish in Russia, although its leader Kastus Kalinouski, having established the provisional government of Lithuania and Belarus, issued state documents in Belarusian. The uprising was brutally suppressed, Kalinouski and dozens of his comrades-in-arms were executed, and hundreds of active Belarusians were exiled to Siberia. The repressions and exiles continued into the 1870s and 1880s. Concurrently, Russian officials of all levels, teachers, police officers, military officers, and priests arrived and settled in Belarus.

Similar processes took place in Ukraine in the 19th and early 20th centuries. However, modern Russian ideologists completely ignore these facts, just as they ignore the modern understanding of nations, making a fatal scientific and political mistake.

The Belarusian and Ukrainian People’s Republics established after World War I lost their respective wars of independence to Bolshevik Russia, and it continued the repressions against Belarusians and Ukrainians initiated under the czars. In 1921 alone, nearly 1,500 so-called Belarusian “nationalists” were repressed. Even during the Belarusization period (1923–1929) in the Byelorussian Soviet Socialist Republic (BSSR), when the Belarusian language reappeared in schools and universities, the repressions and exiles remained. Since 1930, they became massive in scale and persisted until World War II. Almost all members of the BSSR Union of Writers were exiled, most of them were executed by shooting; the same fate awaited thousands of Belarusian scientists, teachers, journalists, and civil servants.

When World War II began and some Belarusian emigrant activists returned to Minsk, passers-by on the streets shrank back from them when hearing Belarusian speech. After the repressions of the 1930s, people were afraid to utter even a word in Belarusian. The Nazis took advantage of the national sentiments. They opened more than 3,500 Belarusian schools in Belarus and allowed to establish Belarusian public organizations, print newspapers, and open schools and universities. However, Soviet partisans, following orders from Moscow, set Belarusian schools on fire and killed teachers. After the war, repressions and mass deportations were renewed.  In 1945–1950 alone, about 1 million young men and women were deported from Belarus.

The losses of Belarusian culture from being a part of the Russian Empire and the USSR are tremendous: in the 18th–19th centuries, countless art and book collections were expropriated by Russia; an unimaginable number of paintings, sculptures and books printed in ancient times were burnt. In the 1920s–1930s, numerous works of Belarusian poets, writers and composers were burnt as well. In the 1920s–1950s, archival documents were destroyed. The historical downtowns of Kyiv and Minsk, devastated during World War II, were not rebuilt, while the restoration of 15 ancient Russian towns was specifically approved by a special decree as early as November 1945.

The eminent French historian Alain Besançon wrote: “The Soviet regime launched an attack on the Ukrainian language… It managed to russify Kiev, Kharkov and other major cities (evidence of this is that I present the Russian spelling of these proper names) – both by immigration of Russians to Ukraine, and by forcing Ukrainians to use only Russian in scientific and technical activities, as well as in various public spheres of life.”

If we replace the word “Ukrainian” with “Belarusian”, we get an accurate description of what Russia has done to the Belarusian language. In the 1960s, there were no more Belarusian-speaking schools and universities in Belarusian cities – the cities became Russian-speaking. It is in this way that we have become “very much alike”.

Our nations have never put up with this situation. Belarusian and Ukrainian language movements and, consequently, repressions of the movements’ defenders continued throughout the existence of the Soviet Union. The only difference is that back then Ukrainian-speaking Ukrainians and Belarusian-speaking Belarusians were called nationalists, and today they are decried as “Nazis”.

Russians think that if people in Kyiv and Minsk speak Russian, then “we” must be one people. They refuse to understand that Ukrainians and Belarusians speaking Russian does not prove their “Russianness”, but rather speaks of centuries-long repressions and their national identities being suffocated. This deprives Russia of any hope for redeeming itself through remorse and for creating a real historical perspective.

Despite the fact that the Belarusian language has been purposefully destroyed for more than two hundred years and is now in danger of extinction, according to the UN classification, it is still alive, and this is a testimony to the great mystery and power of the national spirit.

To speak today about “one people” is not only to ignore the historical facts, but also to pander to the savage slaughter unleashed by Russia in Europe. The Russian imperialism stems from the ideas of “the triune Russian people”. When the war is over and Russia gives up on its imperial claims to Belarus and Ukraine, it should focus on its domestic problems and national development. Moreover, Russian intellectuals should make sure that denying the existence of the Ukrainian and Belarusian nations will be a criminal offense in post-war Russia. For it is from such ideas that Russian fascism arises.